A Visit to Gubbio

Last week we went to visit the medieval Umbrian town of Gubbio, the day had started off with blue skies but by the time we arrived it had clouded over, giving the stone buildings of this impressive town a rather austere look. The town hall, the Palazzo dei Consoli, dominates the town and served of a reminder of the town’s independence and civic pride before being swallowed up into the domain of Federico di Montefeltro, a mercenary captain and cultured Renaissance man from nearby Urbino. 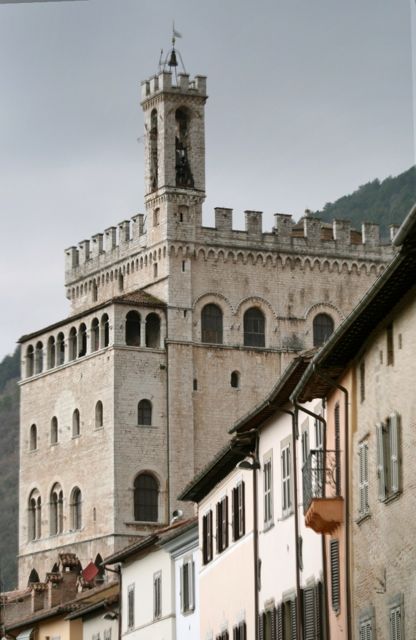 The Palazzo dei Consoli in Gubbio

If you walk up from the Piazza Quaranta Martiri at the bottom of the town there is an elevator that will take you some of the way up to the Palazzo dei Consoli. Another elevator (turn right along Via XX Settembre) will take you up to the Duomo. Gubbio is unusual for an Umbrian town in that the Duomo and the town hall do not face each other across the main piazza, the Piazza Grande was created after the Duomo had been built by levelling a large area of the town and building huge supporting arches underneath.

The second elevator brings you up into the Duomo gardens, from where you can enter the Duomo. The interior has distinctive arches peculiar to Gubbio and known as wagon vaulting. I had remembered that there were several bodies in glass coffins but they they were either wax models, or the bodies had been repaired so often that there was nothing to see but a wax image. Across from the Duomo is Federigo di Montefeltro’s Palazzo Ducale, there are normally art exhibitions on disply here but we were limted for time and gave this a miss. 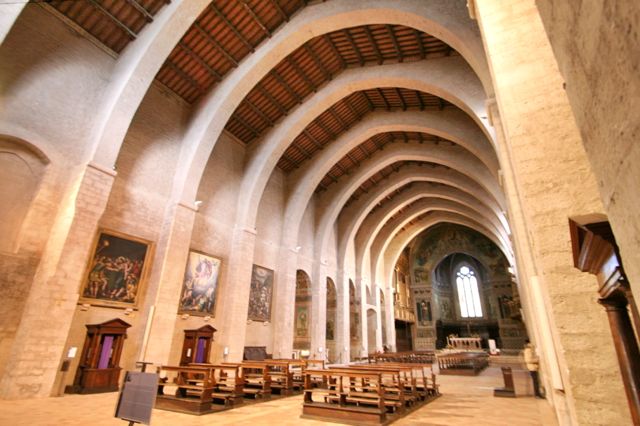 Inside the Duomo, Gubbio

Returning via the elevator we walked south along Via XX Settembre towards the church of Sant’Agostino. I wanted to see the frescoes of the Life Of Sant’Agostino by little known local artist Ottaviano Nelli. The frescoes are on the apse and can be illuminated for three minutes by pressing a switch. Ottivano Nelli’s frescoes were worth going to see but also high up on the front of the apse were scenes from the Last Judgement, I’m not sure who painted them but they were certainly quite entertaining to look at, thanks to my telephoto lens I managed to get some of the details. 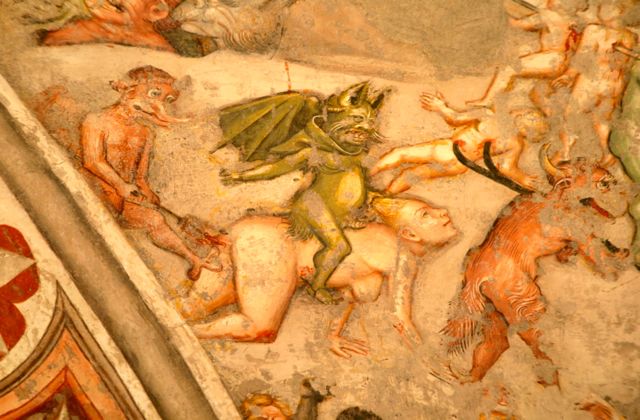 A scene from hell in the church of Sant’Agostino, Gubbio

While wandering around Gubbio I took a few random photos shown in the image gallery below: