A couple of days ago I walked along the ridge on the north side of the Niccone Valley past the chapel of Sant’Anna. 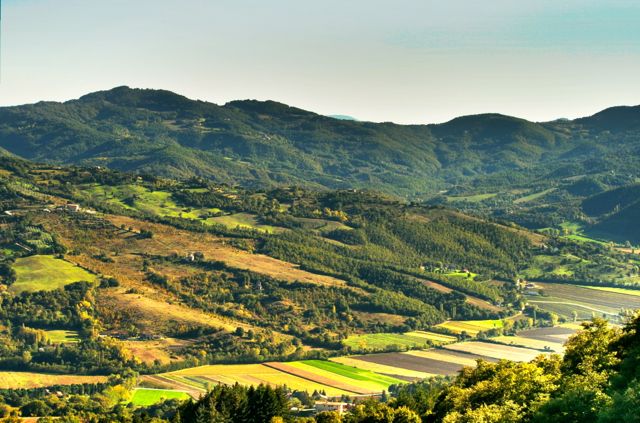 The Niccone Valley seen from the ridge near Sant’Anna

Sant’Anna is the highest point along this part of the ridge and, because of the vantage point this provides there was once a castle here, a large amount of stone wall from the base remains. 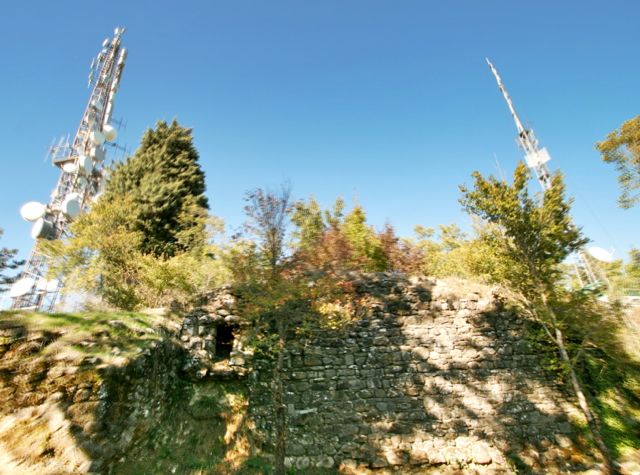 Antennae and the base of the Sant’Anna Castle

There is a tiny modern chapel / shrine as well as the remains of the old church of Sant’Anna. 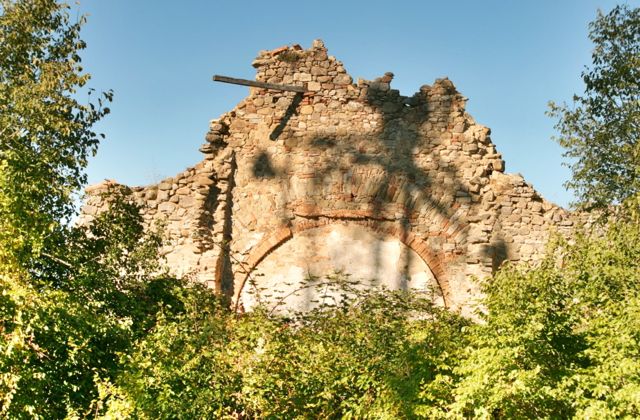 The ruins of the chapel at Sant’Anna

In modern times there is no need for the castle, but because it is is the highest point, there are three antennae that provide cell phone networks and internet to the countryside below. 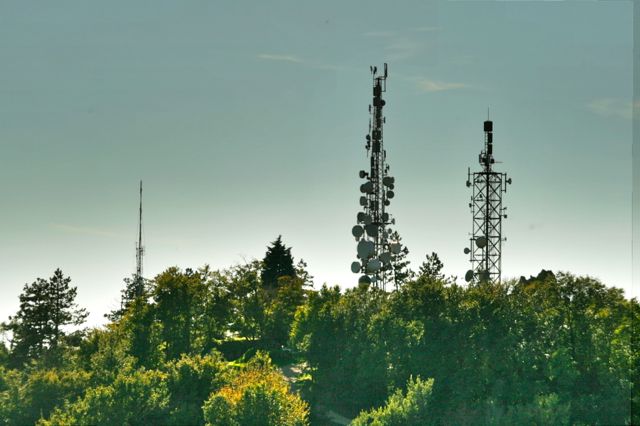 The antennae at Sant’Anna

The antennae dwarf the ruins and the small chapel (filled with flowers and votive candles and obviously well looked after by someone). 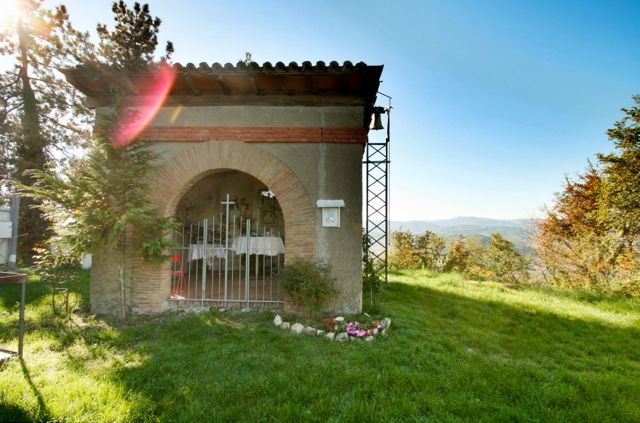 The new chapel at Sant’Anna

There is an eerie atmosphere up here: the ruined buildings, the flickering candles in the new chapel and hum of the electricity used to power the antennae all contribute. In addition there is a giant rotating crucifix with the face of Jesus etched onto a circular glass panel at the top. 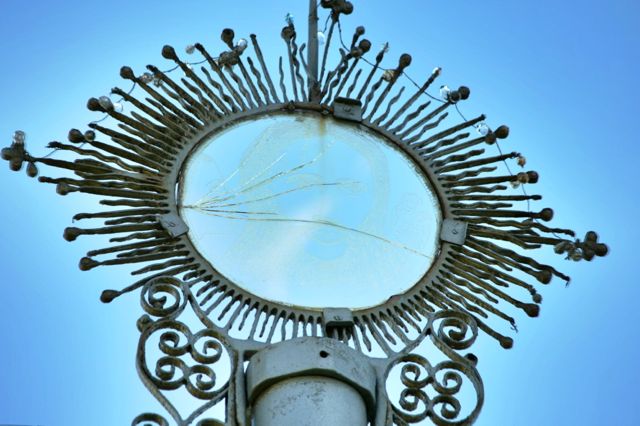 The face of Jesus etched onto glass

There are spectacular views from the ridge and many landmarks are visible including the hill top villages of Monte Santa Maria Tiberina and Montone. 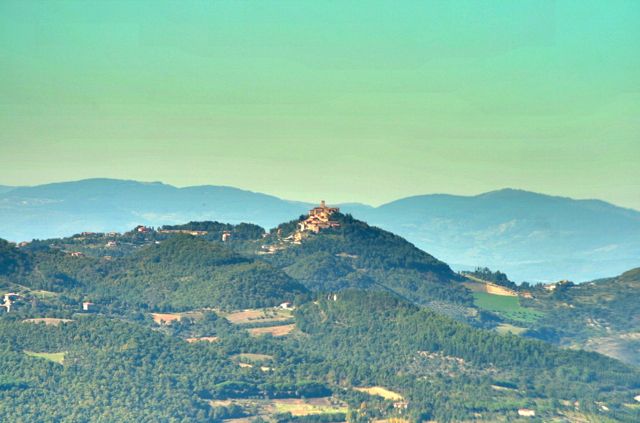 You can also pick out the monastery of Monte Corona and the convent of Canoscio. 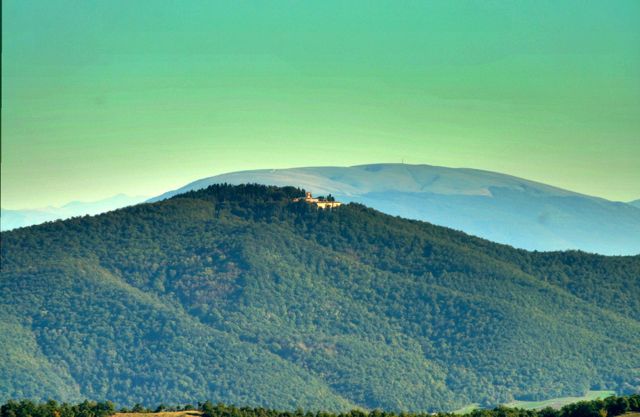 From up here you can see many local mountains such as Monte Acuto, Monte Tezio, Monte Subasio (behind Assisi) and the Appenine peaks of Catria, Cucco and Nerone. 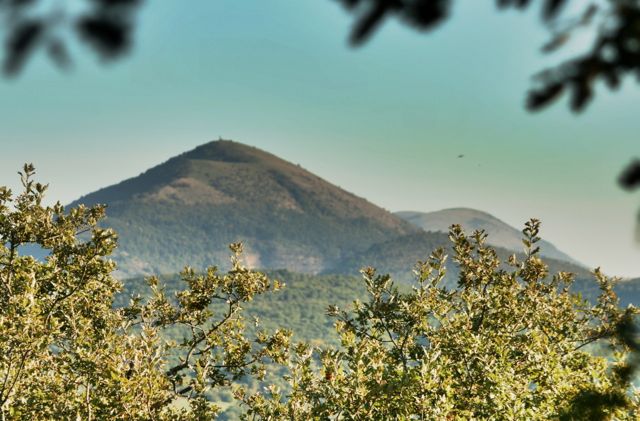 The leaves are starting to turn autumnal and the colours were enhanced by the bright afternoon sunshine. 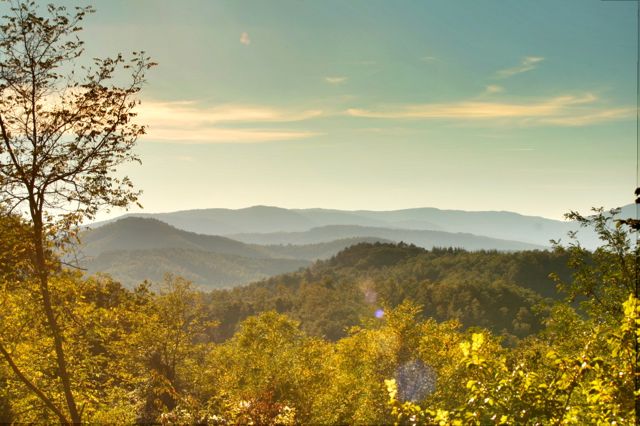 Autumnal colours in the Nestore Valley

The path to Sant’Anna is a short diversion up from the main ridge track, we did a “there and back” ridge walk starting at the top of the hill between Spedalicchio in the Niccone Valley and Calzolaro in the Nestore Valley.